Accurate simulation and prediction of the Madden-Julian Oscillation (MJO) is one of the major challenges for climate modeling and operational weather forecasts. The MJO in the NCEP Coupled Forecast System (CFS) is too weak and propagates too slowly, particularly during its initiation and evolution over the Indian Ocean. With the objective to advance our understanding of the MJO initiation processes and improve MJO prediction, DYNAMO international field campaign provides a substantial amount of oceanic and atmospheric in-situ data. In the last few years, the DYNAMO data have been used to identify important oceanic, atmospheric, and air-sea coupled processes in the MJO initiation and propagation. A primary goal of this proposed study is to advance MJO simulation and prediction in NOAA CFS by improving the representation of the air-sea flux and upper-ocean vertical mixing. The DYNAMO data and the outcome from our previous DYNAMO projects will be maximally utilized for the improvement of MJO simulations. To accomplish this goal, we propose to:

We anticipate that the proposed research with the improved CFS will result in a significant improvement in the forecast of subseasonal variability including the MJO and associated variability such as tropical storms and North America weather. The schemes developed, tested, and implemented in the project also provide guidance for improving the next generation CFS and other coupled models in the climate community, which generally have poor representation of the upper ocean processes and deficient surface fluxes critical to the simulation of the MJO. 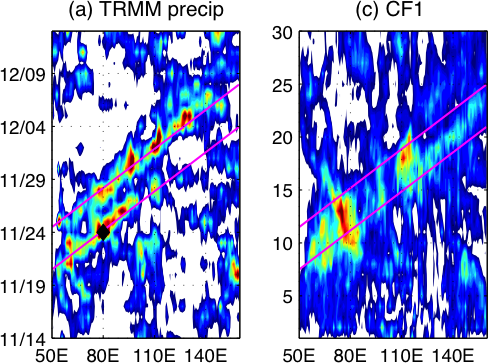