Current scientific evidence indicates that skillful simulations and forecasts of extratropical storms critically depend on accurate representation of air-sea interactions mediated by the oceanic spatial variability near the western boundary currents (WBCs). Despite their importance for short-term climate events such as marine and terrestrial heatwaves, simulations and prediction skills of the storm tracks remain limited, hampering our predictive understanding of socially-relevant fields, such as water/energy usage, soil moisture/temperature, and coastal/ open-ocean upwelling. Here, I propose a high-risk/high-return modeling project to improve the process and predictive understanding of extratropical storms and their impacts. A crucial element is to exploit extensive high-resolution, ocean-atmosphere-wave coupled model simulations, in which critical atmospheric and oceanic dynamics central to the storm-WBC interactions are explicitly resolved without parametrizations. The air-sea interaction physics of the model will be validated and refined with detailed analyses of direct in situ observations to improve the simulations of coastal storms. The verified model will be used for extended-range (weeks to a month) predictability experiments to evaluate predictable components and predictability limits arising from the enhanced simulations of the WBC-storm interactions, focusing on downstream extreme precipitation and atmospheric circulation near the continent’s western coastlines. Capitalizing on the strong synergy between observations and modeling at WHOI, the project's key outcomes – improved physics, verified model, and quantified predictability – will facilitate the development of subsequent non-WHOI projects. Through my current leadership role in the air-sea interaction/climate-modeling community, the project will also make practical contributions to advancing the knowledge and WHOI’s stature in the burgeoning ocean-weather-climate research. 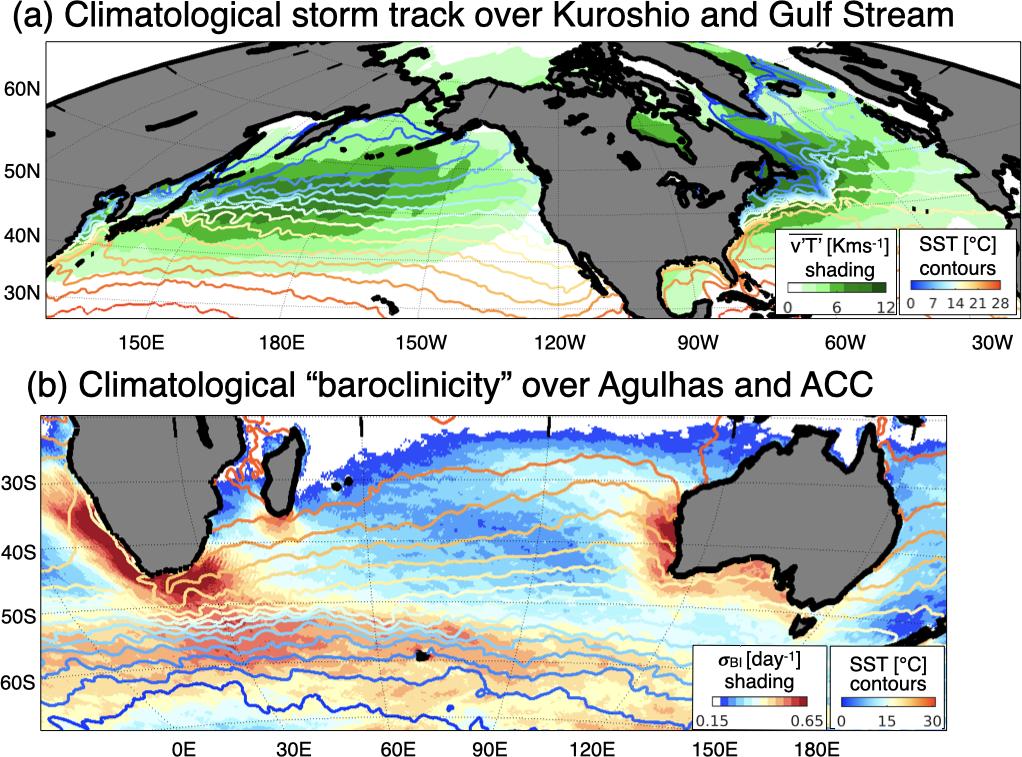 This figure illustrates the climatological relationship of the extratropical storm tracks with the SST fields over the three western boundary current systems, (a) Kuroshio-Oyashio Extension and Gulf Stream and (b) Agulhas Current and the Antarctic Circumpolar Current systems.